On January 30, 2008, Carl KM1H making reference to 75 meter AM wrote: "There may be some great technical people on there but way too many personalities that would be better off in a nursing home".

Irb W2VJZ, became a silent key in December 2006. He made his mark on 3885 with his DX-100. The following sound bites are typical Irb.  Click HERE to check out photos of the W2VJZ Estate Auction.

1-A. W2VJZ identified child rapers right over the airwaves.

1-B. W2VJZ recommended peace on earth, good will to men, with malice toward none, except for execution.

1-C. On the morning of this recording, Irb slid within 3 kHz of the only QSO on the band and called CQ. He deliberately interferred with WB2DGM, K1KBW, AB1CB and W1FRM who were in QSO on what was a clear frequency. How sad it was that Irb derived satisfaction from making others miserable.

1-D. VE3AAM defended W2VJZ, but there was a detractor (ex KD2XA, now W2JBL) at the very end of the monologue.

1-E. NM1V confronted Irb and summarized Irb's negative radio life and offered corrective advice. Clearly flustered and taking advice from no one, Irb countered with Irb logic: "I've been talking on here since before you were born".

1-F. W2VJZ felt that if he made a short QSO in the morning and signed out, that he still 'OWNED' that frequency the rest of the day. Having received an FCC warning letter about this, Irb commented on Riley Hollingsworth.

1-G AB2EZ boldly evaluated W2VJZ and told him not to answer his CQ's.

1-I. AB2EZ and W2VJZ revisited the subject of: "calling all radio amateurs, except you".

1-J. W2VJZ responded to an anonomous "Jew hating" attack. (this went on an on.. Irb finally wore him out).

1-K. W2VJZ, pretending to call CQ, made another one way political Broadcast. Irb never expected an answer and.... Irb never got an answer either.

1-L. W2VJZ singing? Impossible you say. Here is a rare one.

1-N. W2VJZ had been known to exaggerate a teeny bit. You be the judge.

1-O. W2VJZ read a paper he wrote years ago in fond memory of his father.


Johnny W3EGC, distinguished himself on 75 meters by his excessively wide signal and his disruption of other conversations.

2-A. NM1V, whose QSO up the band was disrupted by W3EGC's wide splattering signal, sounds off.

2-B. W3EGC tries to join a QSO, but the roundtable has been bothered in the past by Johnny, so they speak their minds.

2-C. KC2IFR records W3EGC who has been deliberately interfering with his conversations.

2-E. W3EGC, having been told he is causing deliberate interference, boasts about "his credentials" and then tells the detractor that he is of lower intellect.

Tim WA1HLR, the famous radio GURU, has the distinction of being the only Radio Amateur that can be recognized breaking into a round table by simply burping.

3-A. WA1HLR, adding yet another layer of food particles to the poor old D-104 microphone.

3-C. WA1HLR explains why the K1MAN bulletins changed from weekly to daily.

3-D. Timmy sings his famous "I'm a piss weak little mobile" while cruising in the "cadaverlac".

Bill KC2IFR, gets on AM to "breed a little hate and discontent" (4E below) and he always meets his expectations.

4-A. KC2IFR and W3EGC in a grudge match, exchanging colorful metaphors.

4-C. KC2IFR pets his Johnson while thinking about women.

4-D. KC2IFR knows members of the "My shit don't stink group" and lectures them on hi-fi.

4-E. KC2IFR again rants on the "My shit don't stink group" and offers his 'favorite diplomatic phrase' to Brent.

4-F. KC2IFR accused of mixing beer with radio, appears to validate the accusation with this rant.

4-G. KC2IFR having a friendly afternoon of radio, seemed a tad uncomfortable with another operator named Bill.

George W1GAC,  (SK) homebrew builder, QST author and one of the finest gentleman on the amateur radio bands.


John K1DEU,  proclaiming many non-conformist beliefs. Which of the following photos is the real John ? 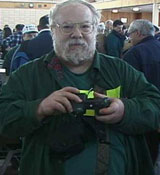 6-A. John thinks he may have been a female in his past life. You be the judge.

6-B. After listening to John for a half hour, K2PTS summarizes his transmission.

Randy KA1UNW, a Marconi Net regular, derives pleasure by putting a negative spin on everything.

8-A. Randy dislikes his Wallingford, CT neighbor and denegrates his character to all net members.

8-B. After Randy's repeated remarks about jammers on the Marconi Net... a stranger checks in and tells him off.

Mike W2OY, (SK) enjoyed driving the kids crazy with his NO LIDS - NO KIDS,  Class A operators CQ's.

9-B. Ranting on some guy that answered a CQ from one of those phonetic school bus riders.

9-C. He just wanted to speak with Class A type operators only.

Glen K1MAN, continues to be one of the most hated guys on 75 meters for his 24-7 BROADCASTS on 3890.  Second photo shows Glen with K4KYV and WA1HLR, before the hated "bulletin service" began.  Years ago Walter Cronkite, famous CBS broadcaster, allowed his voice to ID the K1MAN bulletin station, believing that Baxter represented the ARRL.  Having found that this was not the case, Mr. Cronkite, via his lawyer, wrote to Baxter demanding that he cease and desist using Cronkite's voice.  Baxter refused and uses it every day,  out of spite.  Cronkite referred to Baxter as "that odious little man" a comment that most amateurs consider too polite and way too mild.

10-A. K1MAN gives credit to WA1HLR for motovating him to start a bulletin service on 3890 AM.

Fred,  KB2IXT, unlike experienced operators who ignore interference, draws attention to interference which keeps the cycle going.  He encourages Marconi net members to seek out interference and record the event for the FCC as stated in his November 2009 email:  "remember that we are all collectively still actively gathering evidence, therefore if you observe actionable rules violations, document, document, document and get the whole episode of the event memorialized on tape.".........."I am in regular contact with officials in the enforcement unit about what I observe and the process continues... "  Most Radio Amateurs believe that the ham bands are self policing; and that the FCC has more important business than to concern itself with alleged interference on a single Amateur Radio frequency, but not Fred ??

11-A. Seemingly insecure with a persecution complex, Fred scans the band until he finds someone talking behind his back.  So he won't miss a word, Fred divides his time between his Marconi net-control duties and a station almost 30 kHz down the band ?

Chris, W2JBL, a true American.  Likes his 2nd amendment, his music and his beer.

12-A. Shares his viewpoint and vintage AM and class "E" radio.

Edited sound bites of the Special Events station W2A on the air from the Armstrong Tower in Alpine, NJ.  The recordings were made by KC2IFR at South Glens Falls.

Click HERE to check out photos and descriptions of the W2A Special Event.

35-A. Conspiricy theorist and AM hater W8NB knows the "secret" of the Official Observer (OO).

35-B. KB2SIE showing the kindness and respect any New Yorker would have for nearby stations.

35-E. W2PFY, one of our more eloquent 75 meter AM'ers, directs comments toward a jammer.


The following are in promotion of Amplitude Modulation on the Amateur Radio Bands:

36-A. Paul WA3VJB explaining the "bandwarming party" on the expanded 75 meter phone band via a report to the Amateur Radio Newsline #1532. Contains historic 75 meter sound bites.

36-B. Henk PE1MPH (papa echo one mike papa hotel) does an off-line promo for his AM gang on 3705 in the Netherlands. Now that the phone band is expanded, good propagation can yield a direct QSO.


Jean Shepherd K20RS, the famous WOR radio personality (Silent key 1999).  (One morning, many years ago at 2 AM, I had the pleasure of working Jean through a 2 meter repeater in New Brunswick, NJ.  After a couple of transmissions we were told very harshly by the Control Operator that the repeater was for emergencies only.  Luckily, Jean was heading north on the Garden State Parkway near Red Bank, NJ so we switched to 146.52.  We discussed at length, the Control Operator and how lonely and insignificant he must have been to "wield power" at 2 AM on a dead band.  Jean also mentioned that on the way south via the NJ Turnpike he stopped at the Joyce Kilmer rest area and how the young people of the day would not remember Kilmer and his famous "Trees" but would only remember the Joyce Kilmer "rubber French Fries" from the rest stop).

60-C. A radio mother's worst fear about her child.